Rum Bum Racing Third on Circuit of the Americas Grid 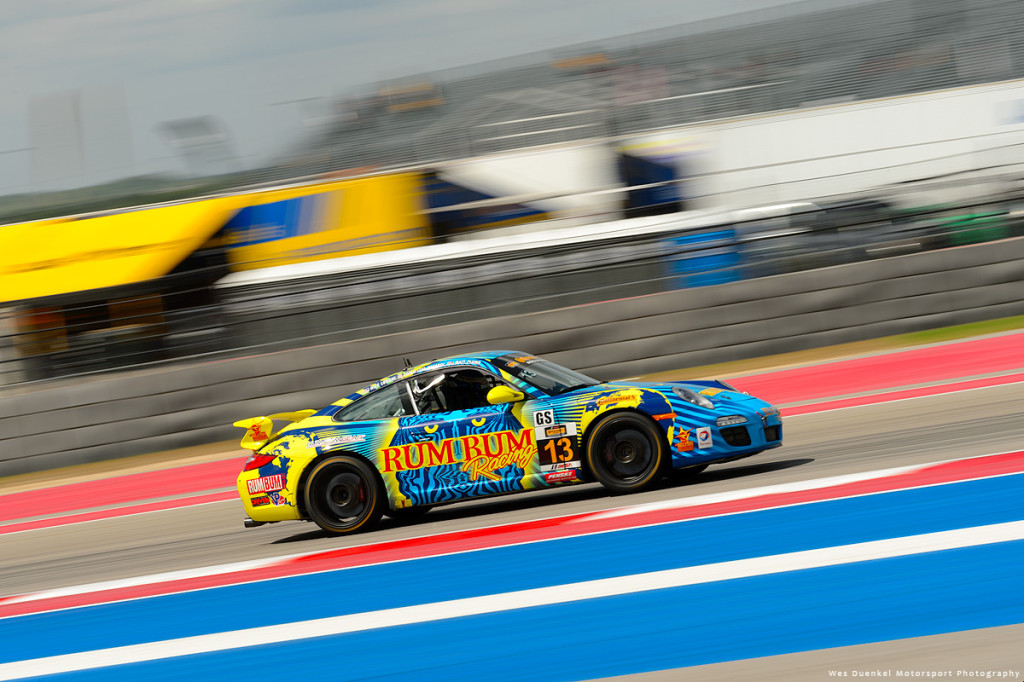 Austin, Texas (18 September 2014) – The Rum Bum Racing No. 13 Porsche will start from the second row of the grid at Circuit of the Americas (COTA) on Friday following Thursday afternoon’s 15-minute qualifying session. Hugh Plumb turned a fast lap time of 2:23.211-seconds around the challenging 3.4-mile road course to take third on the 52-car combined class grid.

Hugh Plumb will open the 2.5-hour IMSA Continental Tire SportsCar Challenge race before handing the controls over to his brother and co-driver Matt Plumb who will take the car to the finish. Having placed fourth in last year’s debut race at COTA after starting third, Rum Bum Racing looks to take its first Circuit of the Americas podium with a positive outing in Friday’s race.

The No. 13 Porsche rolled off of the trailer and was immediately quick as the team posted the quickest time during the first practice held under warm and slightly wet track conditions. Rum Bum Racing then posted the fifth quickest time of the second practice which was held under hot and sticky weather conditions as the Rum Bum squad prepared for the 15-minute qualifying run.

“It’s great to be able to put the Rum Bum Porsche right up at the front,” said Hugh Plumb. “Thanks to the Bacardis and all the guys at Rum Bum for giving me a great car. And of course to my brother Matt who I expect to bring it home and put us right at the front at the end of the race. The car was good. I only had a couple of laps and it says something about the team, for me to be able to just get in the car and put it up front. So I thank them and the Bacardi family the most.Tomorrow we’ll just try to keep it clean and keep it at the front.”

With rain in the forecast for Friday’s race, the event could be an interesting one with different strategies put into play.

After some bad racing luck in the previous two events, the 2012 & 2013 GS Champions would like nothing more than to return to the podium at such an iconic circuit as the Circuit of the Americas.

The 2.5-hour race is set to go green at 12:20PM Central Time and will be streamed LIVE on imsa.com. Follow @RumBumRacing on Twitter for updates throughout the race!