Rum Bum Racing on the Front Row for Daytona Season-Opener 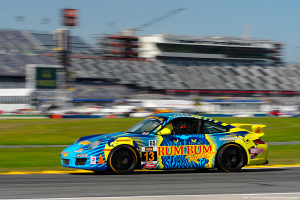 Daytona Beach, Fla. (22 January 2014) – When Luis Bacardi’s Rum Bum Racing takes the green flag for the Daytona 200 on Friday, starting driver Hugh Plumb will have a prime view after he qualified the No. 13 Rum Bum Racing Porsche on the front row for tomorrow’s 2.5-hour IMSA Continental Tire SportsCar Challenge race.

A 15-minute Thursday afternoon qualifying session saw Plumb post a fast time of 1:56.779-seconds on his first flying lap as his ‘eyes in the sky’ Nick Longhi coached him for a good gap in traffic.

The No. 13 Rum Bum Racing Porsche scored good draft on the high banks of Daytona International Speedway, helping Plumb score some precious tenths on the way to his fastest lap of the weekend so far. The effort was enough to secure second on the grid for 2015 IMSA Continental Tire SportsCar Challenge season-opening event.

“With this sort of team, I expect to be on the front row and I think if it was anything less, I would have let the team down,” said Hugh Plumb. “Thank you to the Bacardis, Rum Bum, and the whole team for making this happen.

Luckily, I was able to find a car to help us out on that lap because our car is good in the draft. And that’s what we needed. I think we’ll be right there at the front again tomorrow.. The plan is to give the car to Matt (Plumb) without a scratch and we’ll be all good.” 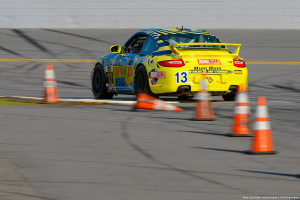 Hugh Plumb will open the race before handing the car over to his brother Matt Plumb, who also serves as Rum Bum Racing Team Manager, to take to the checkered flag.

Daytona International Speedway serves as Rum Bum Racing’s home track, with the team shop based in nearby Orlando, Florida. Having won the Daytona event twice before, the Rum Bum Racing squad is eager to return to Gatorade Victory Lane for a third time in front of their hometown fans.

“We didn’t have the car we really wanted after the practice sessions on Wednesday, but the guys put a ton of work in overnight to make a lot of changes, and that was clear in Hugh’s quick times,” said Matt Plumb. “It’s great to be starting with good track position and hopefully we can come out of here with a big result to kick off the year.”

The race will be streamed LIVE tomorrow on www.imsa.com beginning at 1:45 PM ET.