Rum Bum Racing Ready for Round 4 at Lime Rock Park 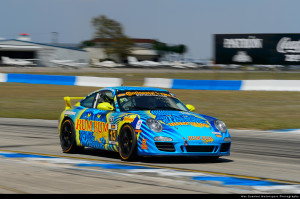 Orlando, Fla. (19 May 2014) – Luis Bacardi’s Rum Bum Racing is geared up for Round 4 of the IMSA Continental Tire SportsCar Challenge and is eager to return to a track that holds fond memories for the team and drivers Matt Plumb and Nick Longhi. Rum Bum Racing won outright at Lime Rock in 2011 & 2012 and finished third last year when the organization clinched both the 2013 Team and Driver IMSA championships.

Lime Rock Park is considered both Longhi and Plumb’s home track. Longhi resides in Nyack, New York which is 80 miles south of the circuit while Plumb lives just a three-hour drive away in Newport, Rhode Island. Having worked the furiously fast road racing bullring as instructors, and with countless laps around the 1.53-mile Connecticut road course to their credit, the duo can claim the home ground on the seven-turn track.

The track length plays a big role in strategy at Lime Rock as decisions are made quickly with each lap lasting just under a minute. Rum Bum Racing relies extensively on the canny strategy of crew chief Joe Varde which has seen the team pull off multiple victories through the years. It will be no different this year as Rum Bum looks to pick up its first win of the season in the No. 13 Rum Bum Racing Porsche.

“We’ve been on the right path with our results, but we definitely are not where we want to be just yet,” said Plumb. “This is a place that has been pretty good to us through the years and it’d be awesome to kind of turn the corner for the rest of the season at Lime Rock. I know this whole team is eager to do that!”

Rum Bum Racing, who has 14 wins in just four years of IMSA competition, has not had the start to the 2014 season the team had hoped for, but as the organization returns to a track where they’ve seen so much success, Rum Bum aims to turn the page forward with a fourth consecutive trip to the podium on Saturday.

“It won’t be easy, as we’ve seen how strong the competition is this year,” said Plumb. “But like we showed at Laguna, if you don’t have the fastest car, that doesn’t mean that you can’t run up front. This place is big for strategy and maybe that’s what makes the difference on Saturday.”

The Continental Tire SportsCar Challenge usually features a 60+ car combined-class grid but as the series takes to Lime Rock Park, the GS and ST classes will be separated with the ST class running in the morning and Rum Bum Racing’s GS category taking the green flag for the 2.5-hour Northeast Grand Prix at 2:15 PM Saturday afternoon.

“It’s Lime Rock, so that means we not only know the track, but we also know the people that work here, the best back roads to get here quickly, and it’s so familiar to you that it’s really comfortable to come race here,” said Longhi. “The other great thing is that this is a traditional weekend, and Matt and I both are lucky to have a lot of family here for the race and that always adds something to the weekend. Hopefully it brings us a little bit of good luck!”

The two classes will run separately all weekend through two practice sessions and qualifying on Friday and both races will take place on Saturday.

Live timing and scoring is available at www.imsa.com. Follow @RumBumRacing on Twitter for updates throughout the weekend.