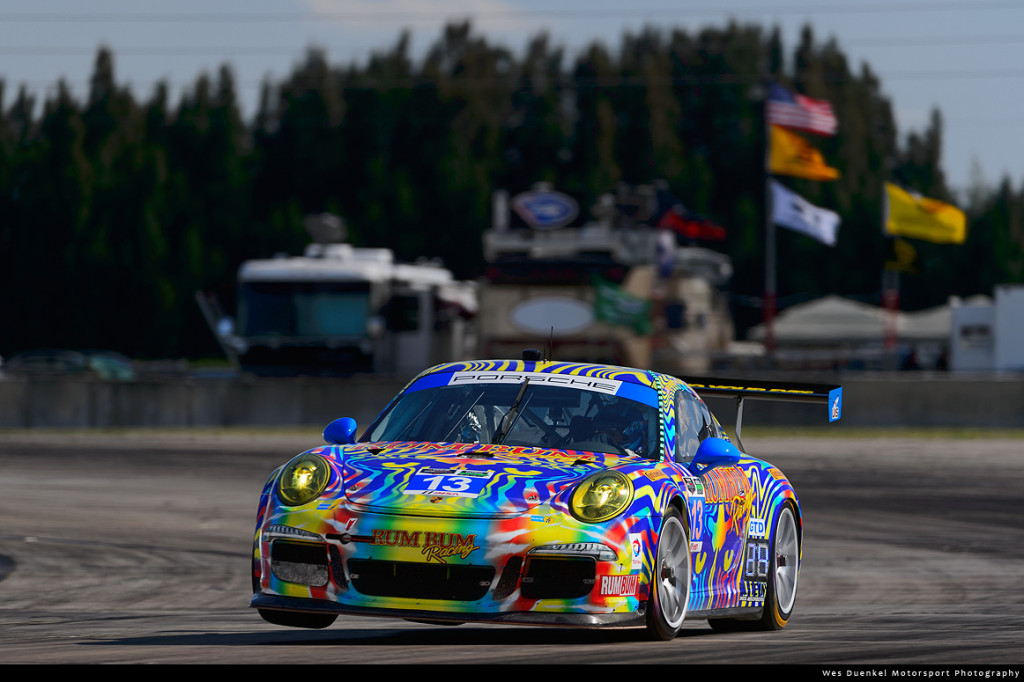 Sebring, Fla. (14 March 2014) – Rum Bum Racing will make its debut in the Mobil 1 Twelve Hours of Sebring Fueled by Fresh From Florida Saturday at Sebring International Raceway with the No. 13 Porsche GT America and will start from the inside of the fourth row after Jan Heylen posted a fast lap of 2:04.561-seconds during Friday’s 15-minute qualifying session.

In what has proven to be a stout GTD field in the IMSA TUDOR United SportsCar Championship, Heylen’s qualifying time was just three tenths off of the pole position time. He will share the No. 13 Porsche machine with co-drivers Madison Snow, Hugh Plumb, and Matt Plumb as the group looks for a strong finish at the 3.74-mile road course.

“I’m a little bit frustrated with myself because we were so close to the pole and I know the car had it in it,” said Heylen. “I know the qualifying doesn’t mean much for the race but, hey, that’s what we’re here for right?! We’ve had very little track time compared to the other teams so we’re just playing catch up. But man the Rum Bum guys have just done an amazing job in qualifying compared to where we were yesterday and this morning. Today the car was so much better and I feel good about the race tomorrow. It’s too bad we just missed the pole but we’ll do better tomorrow.”

The qualifying effort marked the end of a busy day for Rum Bum Racing as the team also competed in Round 2 of the IMSA Continental Tire SportsCar Challenge. The team looked poised for another podium finish after another great strategy call from Joe Varde, but a trivial officiating call from IMSA saw the team fall a lap down before fighting back to take a disappointing 10th place result at the finish.

“As far as the Continental race, as a team we functioned as well as we could possibly function,” said Team Manager and driver Matt Plumb. “We suffered the effects of a strange pit lane call by IMSA. But the good news is that our crew is up to form for the race tomorrow and the car is good, it is where we need it to be and we’re ready to go.”

The Mobil 1 12 Hours of Sebring will go green tomorrow at 10:15 AM ET. The first three hours of the race will be televised live on FOX Sports 1 with the entire race streamed live at www.imsa.com.