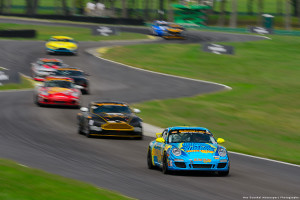 Alton, Va. (23 August 2014) – Rum Bum Racing had been hoping to turn the team’s luck around in Round 10 of the IMSA Continental Tire SportsCar Challenge championship at Virginia International Raceway on Saturday, but the team faced disappointment when the group was forced to retire the No. 13 Porsche just a few laps into the race.

Drivers Nick Longhi and Matt Plumb and the Rum Bum Racing squad improved the No. 13 Porsche throughout the weekend’s practice sessions and looked to convert that momentum into a positive result in Saturday’s 2.5-hour race. Longhi was the quickest Porsche in Friday’s qualifying and opened the race from 13th on the grid, eager to move forward.

Longhi wasted no time maneuvering his way up as he moved into 10th on just the first lap. Unfortunately that forward progression came to a halt just three laps after an error in shifting caused irreversible damage to the Porsche powerplant, ending the day early for the defending championship squad.

“It’s such a shame because it doesn’t represent the time and effort everybody at Rum Bum Racing puts into this,” said Plumb, who serves as both driver and Team Manager for Rum Bum Racing. “We just have to keep moving forward. We can’t give up. We’re not going to throw in the towel. It’s tough. These guys don’t deserve it and our owner Luis Bacardi doesn’t deserve it. So we’ll rebound and get things back on track and figure out where we go from here.”

Rum Bum Racing next travels to Circuit of the Americas for Round 11 of the 2014 IMSA Continental Tire SportsCar Challenge championship on September 19 & 20.