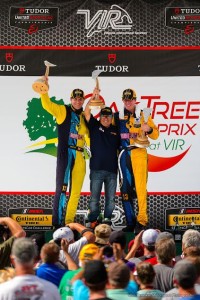 Alton Va. (22 August 2015) – It was another big victory at Virginia International Raceway on Saturday as Rum Bum Racing delivered the team’s third win of the 2015 IMSA Continental Tire SportsCar Challenge season and 18th overall win since the team’s 2010 debut.

The result sees Rum Bum Racing improve in its championship fight with the team sitting just 10 points out of the championship lead with two races remaining on the 2015 calendar.

The victory didn’t come easily for brothers Matt and Hugh Plumb who drove without power steering after an issue emerged toward the end of Hugh’s first stint under the brutal warm Virginia weather conditions, but the duo persevered. Under the direction of Crew Chief Joe Varde, who called a perfect strategy that saw the No. 13 Rum Bum Racing Porsche leapfrog from fifth to the race lead when all of the other GS contenders ran short on fuel, the team came out on top.

“I think the stars aligned for us today and thankfully so, my mother was in attendance for her birthday and it was my wife and my 17th anniversary!” said Matt Plumb from Victory Lane. “Once the power steering issue occurred, I think the strategy changed to one of conservation. There is no one in the business better than Joe Varde and the Rum Bum gang to rethink a plan once a curveball is thrown. True to form, they played it right, and all I had to do was hang on to the car!”

Hugh Plumb opened from fourth on the grid and Varde called for an early pit stop under caution with about 30 minutes completed and the team pitted the car for fuel and tires.

He returned to the track and ran as high as second before pitting for a full service stop under the race’s third full course caution with about an hour and 12 minutes yet to run. 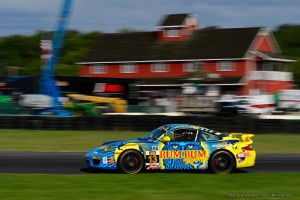 Matt Plumb immediately went into fuel saving mode as Varde called for a strategy that would see the No. 13 Rum Bum Racing Porsche save fuel and not make a late-race splash for fuel. That strategy call worked out perfectly as the race came to a close.

A full course caution was displayed shortly after the No. 13 Rum Bum Racing Porsche took the point and the race finished under caution. The Rum Bum machine led the two laps that mattered most and Matt Plumb took the checkered flag first in line.

“It was a bit grueling because the amount of force needed to work the wheel was a bit overwhelming for a while,” said Hugh Plumb. “It is just unbelievable and honestly these are the kinds of victories that make this team great. Winning when things are going right is one thing, but winning when everything goes wrong, that’s what separates the Rum Bum guys from the rest. Luis Bacardi knew what he was doing when he assembled this bunch!” 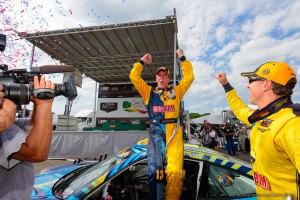 Notes:
– Second consecutive and third win of the season for Rum Bum Racing
– Rum Bum Racing improves in the championship hunt, now just 10 points out of the lead
– Plumb brothers three-for-three at VIR, every race at VIR they’ve run together the brothers have won
– Matt Plumb builds on his record as the winningest driver with 22 victories in IMSA Continental Tire SportsCar Challenge
– Today is Matt Plumb’s 17th wedding anniversary and the Plumbs’ mother’s birthday
– With the win, Rum Bum Racing has stood on the podium in half of the races they’ve entered (62 starts, 31 podiums)
– The win is Rum Bum Racing’s 18th overall win in IMSA Continental Tire SportsCar Challenge