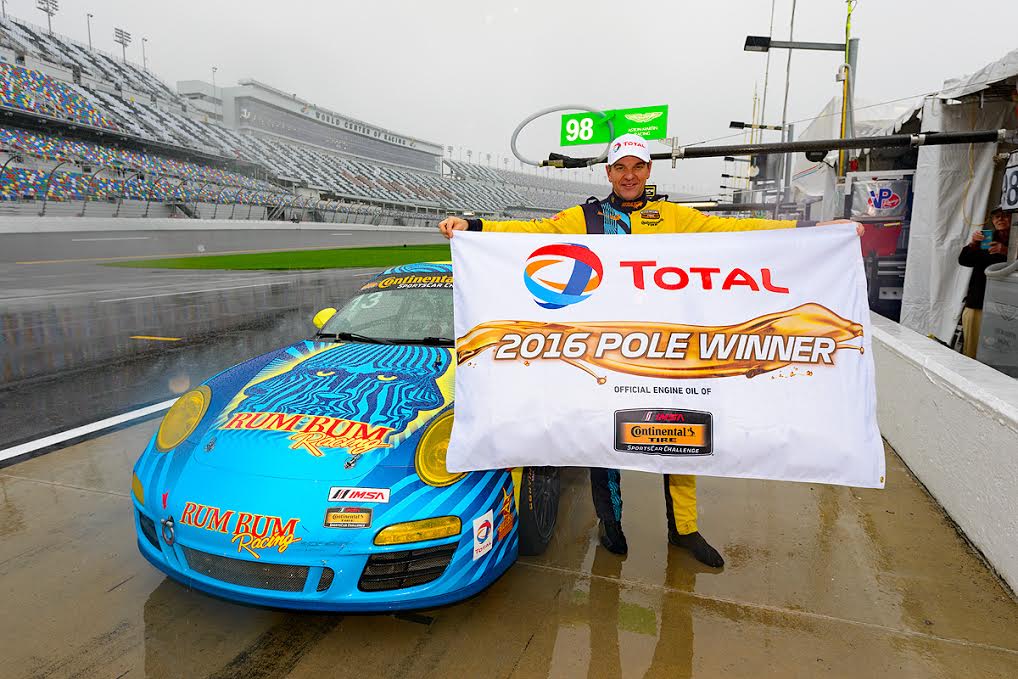 Daytona Beach, Fla. (28 January 2016) – Shaking off the challenging weather conditions, Luis Bacardi’s Rum Bum Racing was right back up to its usual speed at its home track of Daytona International Speedway on Friday when Hugh Plumb put the No. 13 Rum Bum Racing Porsche 997 at the top of the time charts during a very rainy, wet IMSA Continental Tire SportsCar Challenge qualifying session on Thursday.

As the rain picked up and worsened through the 15-minutes of qualifying, Plumb improved his time with each lap around the 3.56-mile lap at the “World Center of Racing.”

His quickest time of 2:12.492-seconds was half of a second faster than the rest of the field. It marks Hugh’s second consecutive front row start at Daytona after he qualified second for Rum Bum Racing in last year’s race.

The run to the pole was all the more impressive for Hugh Plumb, who had never driven in the rain at the Daytona circuit prior to this year’s event.

“The conditions have been constantly changing through each practice because it’s been drying, then raining, then drying,” said Hugh Plumb after accepting the Total Pole Award. “In qualifying, it was pretty much a downpour so each corner was just adapting and reacting to what was potentially coming at you. You would just keep trying to go faster, step over the boundary and learn how far you could push it. Then, you’d get to the next corner and it’d be even wetter!”

Rum Bum Racing also scored the pole at Daytona in 2011 and went on to lead 28 laps en route to victory. 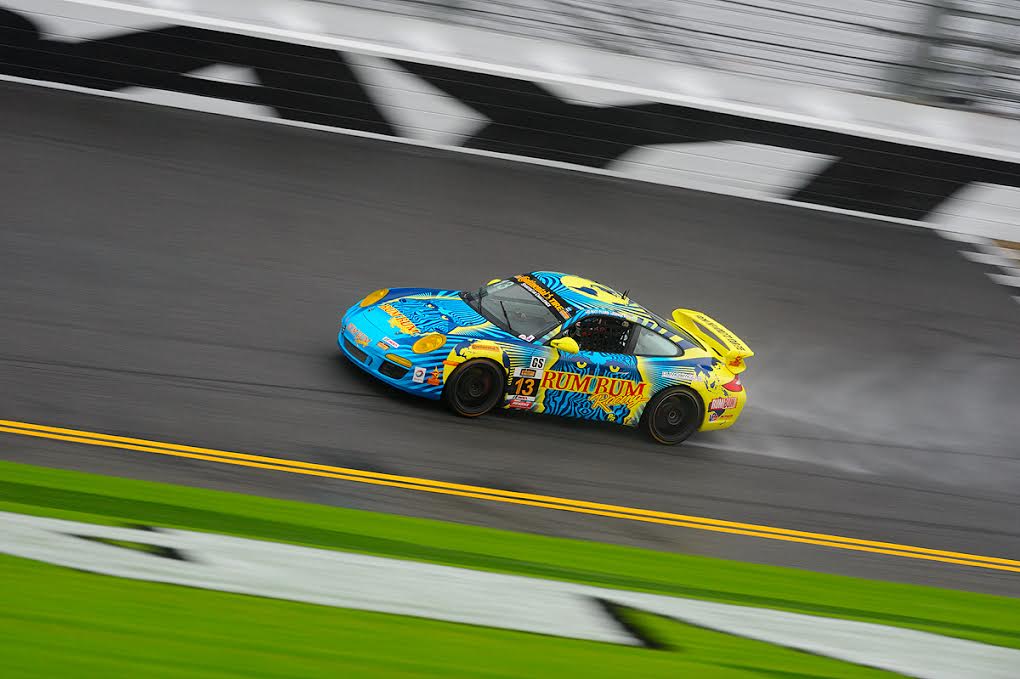 “The Porsche is good here,” said Hugh Plumb. “We’ve had a set up we’ve used for the last few of our races here at Daytona and that’s always seemed to work well for us. Everybody at Rum Bum just does an incredible job and exactly what they have to do.”

The Daytona weekend featured an abundance of rain with the 3.56-mile Florida road course providing for some slick driving conditions through two practice sessions on Wednesday and a third practice on Thursday. With the Continental Tire rains adding strength to the Porsche machine, Hugh and co-driver Matt Plumb posted quick times throughout each session.

The brothers drove to the second quickest time in each of the three practice sessions.

“We’ve had a lot of time to prepare for these conditions and the car showed that it’s where it needed to be,” said Matt Plumb, who also serves as the Rum Bum Racing Team Manager. “Hugh did an amazing job. Each lap was faster than the next and he was consistently setting the bar higher and higher to the point where he did his fastest lap when the rain was coming down the hardest. He did a great job all last year and once again he’s showing he’s the man for the job.”

With the rain forecasted to move out and sunny skies predicted for Friday’s race, the event could well see very different racing conditions.

“The good and the bad for tomorrow is that we’ve been here before and we have a setup that works,” added Matt Plumb. “The bad is that we’re not quite sure where everybody else is pace wise (because of the rain), but that’s something we can’t control and we can’t worry about. We’ve just got to run our race and I’m very confident that everyone at Rum Bum Racing will do the great work that they always do.”

Since debuting in 2010, Rum Bum Racing has taken home three victories, four podiums, and five top-five results at Daytona. On a track that often features late-race lead changes, Rum Bum Racing  has shown strength from start to finish, having led laps in every race it has ever run at Daytona, for a total of 116 laps led and 31% of the time the car’s been competing on the Daytona circuit.

FOX Sports 1 will televise the Daytona event on Saturday, February 13 at 8:30 AM ET.